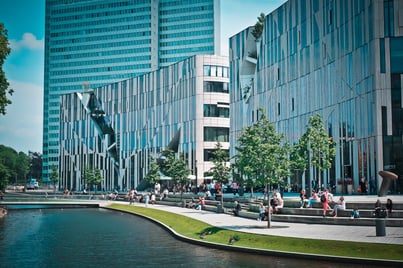 The Internet of Things (IoT) has made real-time IAQ monitoring simple and accessible. Neither cost nor technology remain as roadblocks today. IAQ monitoring will become a non-negotiable for the entirety of the built environment when it recognizes the centrality of the health of building occupants.

IAQ is relevant to every building, not just those “special” buildings prepared for high-end tenancy or buildings catering to the young and elderly. Service providers recognize the growing interest and necessity of IAQ and are repositioning their roadmaps to deliver IAQ-focused service offerings.

Let’s look at the complete IAQ roadmap, which will impact the health of buildings into the future.

No one . . . not the building owner, not the facility management team, not the tenant, nor anyone else connected to the building knows when indoor air pollution exists in the building. Building occupants breathe what they breathe; they can only hope that they aren’t worse off health-wise exiting the building as compared to when they entered.

Many basic reasons exist as to why IAQ will inevitably become part of the infrastructure of modern real estate. Many building owners and operators have chosen to ignore the issue, strategically calculating that it is better not to know indoor air pollution exists in their leased space. Ignorance is a strategy, not a defense.

Step one in the IAQ roadmap is simple situational awareness. Do you know the risks associated with contaminants polluting the air in your building? Real-time wireless IAQ sensors enabled by modern IoT technology stacks will bring immediate visibility to present air pollution issues. Are the levels of VOCs due to off-gassing by newly installed furniture present health risks? Are the carbon dioxide levels in the conference rooms persistently over 1000 ppm and inhibiting employee productivity?

Don’t be left in the dark.

Congratulations! Once modern IAQ sensors have been installed in the building, you’ve achieved situational awareness. The process has only just begun, however. The ability to visualize IAQ conditions in the various parts of the building is necessary, but not sufficient. The existence of IAQ sensing is not the end goal.

The next step in the process is risk mitigation. Now that an air pollution condition has been detected, active steps should be taken to alleviate such a condition. As anyone would appreciate, clearing the polluted area of building occupants represents an extreme reaction to situational awareness. The costs associated with such actions are prohibitive to tenants, and disastrous to the reputation of building owners.

Step two of the IAQ roadmap includes integration of the IAQ monitoring system with the Building Automation System (BAS) controlling the HVAC operation. Automated risk mitigation can then ensue.

In one example, IoT IAQ sensors would connect to an off-site IoT Cloud Core either directly or through an intermediary gateway device. After successfully integrating the IAQ monitoring system with the BAS infrastructure to address air pollution issues in an automated fashion, the process still isn’t finished. The ability to visualize and correct air pollution conditions is necessary, but not sufficient. Due to the health implications of indoor air pollution, building certification for IAQ will become a greater reality.

It won’t be enough to state the existence of real-time IAQ monitoring and BAS integration because the end goal is to assure building occupants that the indoor air conditions have actually remained at healthy levels for the month, quarter, year, etc.

Health regulations will continue to spread. It is inevitable.

The momentum of IAQ has grown rapidly within the real estate market. The IAQ roadmap described above should guide any interested party looking to engage in a meaningful way with current indoor air pollution concerns.