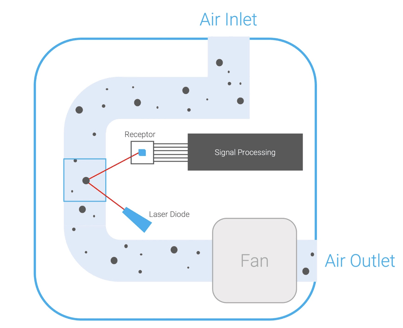 What You Need to Know About Particulate Matter Sensors

Particulate Matter (PM) is an air pollutant that has recently received a lot of attention because of its negative health effects. PM of size 10µm and lower can enter the respiratory system and cause cancer and diseases. Most research on harmful concentration levels has been done for outdoor exposure; there is limited research and attention paid to indoor environments where most people spend 80 to 90% of their time.

PM sampling has been done since the 1960s. In the last few years, the emergence of IoT has popularized low-cost PM sensors embedded inside Indoor Air Quality (IAQ) monitors. These sensors are still in their infancy and are less accurate than expensive laboratory equipment. Their real-time and low-cost nature, however, helps the public understand what is in the air they breathe. This knowledge helps them make sure they are in a space where measures have been implemented to make it as safe as possible.

Expensive equipment uses methodologies such as gravimetric mass determination that look at the mass of filtered particles of different sizes over a period of time. Real-time low-cost PM sensors use light scattering techniques, which can be as precise and accurate, but not in the miniaturized versions found in the low-cost sensors. To keep the sensors portable and affordable, manufacturers simplified the designs, which directly impacts the precision and accuracy of the data they output. Unfortunately, the data sheets poorly document these choices and instead focuses on flashy marketing language such as “we measure the smallest particle size a sensor can detect”, which will misguide most users.

In this article, we will look at different design choices and their impact on the quality of the data.

Light scattering is based on the dispersion of light when it interacts with particles of different sizes. Inside the sensor, a laser diode emits light. The particles going through the sensor will interact and deflect the light based on their size. The scattered light will then interact with a photodetector that will determine the size of the particles based on the intensity of the signals they are measuring via signal processing and classification algorithms. The sensors will measure the number of particles per unit of volume (number concentration), and will then convert it into mass concentration based on estimations of particle mass. Since particles are assumed to be spherical, their mass grows with the third power of their diameter, which means that larger particles will heavily impact the total computed mass. Figure 1 - Generic diagram of a light scattering PM sensor. The scattered light intensity depends on the angle and the particle size.

Before the particles arrive in front of the laser, they need to make their way from the room to the laser chamber through the sensor inlet. This is done using a fan or a pump inside the sensor. Both the strength of the fan/pump and the airflow path inside the sensor will affect what size of particles can make it to the laser. Some datasheets will not mention the flow rate, in which case it is probably low (as low as 0.003 CFM) and won’t be able to effectively bring heavier particles inside the sensor. More advanced sensors, on the other hand, will mention flow rates of 0.1 CFM and above. The air path is also important, as right angles might block heavier particles. Figure 2 - Simplified view of the inside of a PM sensor

The intensity of the light measured by the detector is used to estimate the size of the particle that crossed the laser beam. This intensity is not linear with the particle size; it also depends on the angle between the laser and the detector, the type of particle, and wavelength of the laser. As shown in Figure 3, if the angle is between 150° and 170°, a particle of 4µm size will have the same intensity as a particle of 2µm size and the sensor won’t be able to distinguish the actual particle size. Most low-cost sensors will use an angle of 90° as it is the simplest and most cost effective. More advanced sensors will use two lasers and/or two detectors at different angles, which will greatly improve proper size categorization. Other more expensive devices will use mirrors to focus the light, which will make them more accurate but will require maintenance as the mirrors will get dirty over time. Because of the underlying equations driving light scattering behavior, the wavelength of the laser needs to be proportional to the particle diameter. In low-cost PM sensors, a red laser is generally used (~660nm or 0.66µm wavelength). The optimum particle detection is 1x to 10x the laser wavelength, which means particles having sizes between 0.66µm and 6.6µm. This is why low-cost PM sensors are limited to particles of size 0.3µm; even good signal processing will not be able to detect particles below that size. Sensors that advertise lower particle size counting are usually just estimating them by extrapolation, not by actually particle counting. Blue lasers with a wavelength in the 450nm will be able to detect particle sizes down to 0.15-0.20µm but won’t be as effective counting larger size particles. The best light to use is white light as it has all the different color wavelengths but these lasers are extremely expensive.

Humidity levels above 70% will impact particle counting because particles become sticky and smaller particles will aggregate causing sensors to count them as a large particle. It is therefore important to make sure that the sensor has a process to dry the particles before they pass in front of the laser. Additionally, the wet particles will also stick inside the sensor and eventually clog the inside of the sensor in humid environments such as when measuring outside air or supply air.

Because low-cost PM sensors make a lot of assumptions in their calculations, they are usually calibrated against reference instruments by the manufacturers based on specific environmental conditions. Most PM sensors data sheets will not mention how accurate they are at counting particles but by how much they deviate from a reference instrument after calibration. Each manufacturer will have its own way of reporting accuracy. The datasheet will also mention the drift of the sensor over time as these low-cost PM sensors cannot be recalibrated. More advanced sensors will mention their counting efficiency at different particle sizes, which means that they do not rely or rely less on calibration against reference instruments.

Over the last few years, the popularity of PM sensing has attracted a lot of manufacturers and there are now dozens of manufacturers in the field of low-cost PM sensors. However, there isn’t an easy way to differentiate between low quality PM sensors and more advanced and accurate sensors. IAQ monitor vendors that embed these sensors into final products often do not understand how the sensors actually work and use the cheapest sensors on the market. It is important for users to ask their vendors what sensors they use to make sure the data they see is accurate. In an effort to bring some clarity in the market of low-cost PM sensors, organizations such as AQ-SPEC (Air Quality Sensor Performance Evaluation Center) continually test sensors in laboratories and in the field. Only sensors that have high Field R2 (the closer to 1, the closer to the data from a reference instrument) should be used. The technology used in low-cost PM sensing is continuously evolving. Newer and more accurate sensors are continuously released on the market, but iterating on final IAQ monitor products is expensive. Thus, making sure that your IAQ monitor uses the best sensors is critical to any IAQ monitoring strategy so that you can actually have assurance that the data you see is accurate and reflects the true quality of the air you breathe.