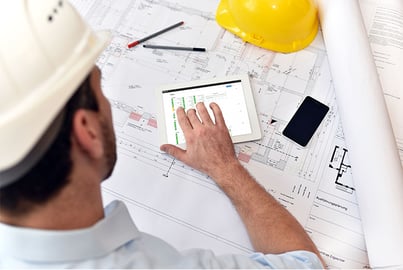 How To Use IoT For Benchmarking in Retro-Commissioning Projects

Benchmarking of your building’s performance especially energy utilization is one of the most powerful tools for curbing energy wastages.

Having said that, using Internet of Things (IoT) for benchmarking can be a game changer and makes it possible for you to invest towards Retro-commissioning projects.

The reasons are not far-fetched. IoT is not a rave for nothing. This technological concept can make life easier for you and your budget. If quick turnaround time, positive outcomes, and profitable ventures interest you then you need to get your benchmarking process right when conducting a retro-commissioning project for commercial buildings. And this is where IoT shines through.

Essentially, IoT “is the concept of connecting any device (so long as it has an on/off switch) to the Internet and to other connected devices. The IoT is a giant network of connected things and people all of which collect and share data about the way they are used and about the environment around them.”

And this concept is becoming increasing popular in its adaptation and usage of the design and construction of commercial buildings.

There is a comprehensive array of sensor embedded devices such as Indoor Air Quality Monitors, meters, Air purifiers, HVAC appliances etc. that are being used in commercial buildings today in line with the concept of IoT which has given rise to automated smart buildings.

IoT allows users to glean real-time data about a building’s performance and presents these data in meaningful and actionable forms for easy usage. It is for this very reason that it’s been able to provide its numerous benefits not limited to improving energy efficiency, lowering operational cost, increasing equipment life span, reducing emissions and wastages etc.

Benchmarking can be described in simple terms as the process of noting the energy performance and water usage of a building- the amount of energy and water a building is consuming over a period of time and comparing it to other buildings in the same locale that are similar in size and use.

According to the Office of Energy Efficiency and Renewable Energy of the United States, “Commercial building energy performance benchmarking is a foundational element of an organization's energy management strategy because you can't manage what you don't measure. Across many commercial building markets, the practice has become standard operating procedure as energy costs and associated environmental and sustainability issues have raised awareness around the importance of energy management.”

Benchmarking is done by dividing the total energy used (kBtu in the US or Watts in other climes) by a commercial property by the total area occupied by the building. The result is often referred to as the Energy Usage Intensity or EUI (reported as Btus per square foot or kilowatt-hours per square foot), which is then compared to results from other buildings.

When it comes to getting energy-use indexes, one of the most popular tools out of several others is the Energy Star Label.  The ENERGY STAR’s Portfolio Manager is a Building’s benchmarking tool that compares the energy efficiency between similar buildings on a scale of 1 to 100, where 100 indicates the most efficient operation and 1 the least efficient performer.

The goal of benchmarking is to determine how efficient the energy utilization of a building is. This is in pursuit of whether or not it is possible to save costs and energy. As such commercial building owners or managers should develop a system that will allow them to understand, compare, and prioritize areas of the building’s performance that will provide the most benefit following retro-commissioning.

Retro-commissioning “is the same systematic process applied to existing buildings that have never been commissioned to ensure that their systems can be operated and maintained according to the owner’s needs.”

According to this source, this term is used for buildings that have been commissioned previously  (either during construction or as an existing building); it is normally done every three to five years to maintain top levels of building performance and/or after other stages of the upgrade process to identify new opportunities for improvement.

The goal is to improve the performance of the building by utilizing a whole-building systems approach in a bid to save energy and improve comfort for occupants of said commercial buildings.

Bottom line, retro-commissioning “allows building deficiencies to be identified and corrected for optimum energy use.”

Today more and more commercial building operators are finding ways to leverage the power of IoT to improve design, construction, and performance of their properties.

One such area of commercial building performance receiving significant attention is the area of energy management. Here, benchmarking can be used to determine reference points that correlate to improved energy performance as well as it enables operators to measure progress, determine milestones, and also provide vital information that spur improvement of building operations and performance.

To achieve the above, IoT can be used in the following benchmarking processes:

It is important that the data collected is as accurate and actionable as can possibly be and this is the goal of data verification. Depending on the retro-commissioning project, IoT smart building solutions can be used to perform activities such as on-site verification, comparing of the data obtained with the building inventory, random sampling of utility meter data for spot checks, and filtering out EUI values that are uncharacteristically high or low when compared with the national median EUI values.

To successfully complete a building performance benchmarking in a retro-commissioning project, you must hit the mark when it comes to analyzing data and interpreting subsequent results.

Yet again, IoT can be used in this regard to compare the baseline values of the building against what has been obtained over time, conduct building performance modeling where actual building performance is compared with potential performance results. Other actions that can easily be completed with IoT include statistical review and comparing individual buildings within a portfolio.

To communicate the result, IoT's intuitive and incredibly user-friendly capabilities holds its own here, ensuring the end user understands the results. Language and metrics used are usually programmed to suit the intended audience.

IoT can be used to compare results and performance of different types of benchmarking models employed either in the past or in a current project. The results will allow you to understand the pros and cons of each model and will also allow you to understand the benefits of using these benchmarks for assessing the performance of the building. Data is easily gathered from the models under review and compared against each to determine which benchmarking model will work best for your intended retro-commissioning project.

Using IoT smart building capabilities, you can quickly discover how your building stacks up against other similar types of buildings across the nation by just the click of a mouse. Integrating IoT in your benchmarking process can allow you compare your building with thousands others from available database such as the Department of Energy Building Performance Database or the CBECS dataset.

Building performance metrics such as HVAC performance, usage, airflow, IAQ etc can be measured on the go and compared with values from the database. Comparison will allow you easily determine which building characteristic is affecting your building’s performance.

Using an IoT smart building solution for benchmarking in retro-commissioning allows you to keep track of your building’s operations and performance from the basic level. Its ability to gather real-time and accurate data will allow you determine the best available energy saving options during the building’s retro-commissioning process, then measure the actual energy saved following intervention.

Through this, buildings can be ranked easily and fairly by performance thus giving rise to prudent utilization of limited resources, which in turn can almost double the return on investment as compared to one that uses a random approach in its retro-commissioning projects.