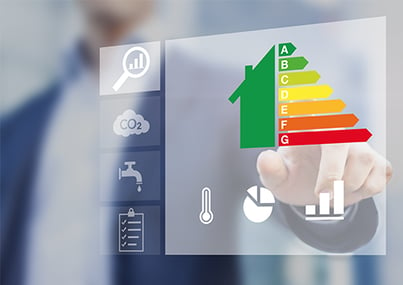 "Indoor Air Quality (IAQ) refers to the air quality within and around buildings and structures, especially as it relates to the health and comfort of building occupants."

Two peculiar aspects stand out in this definition:

The scope of "IAQ": According to the EPA, which is the federal institution charged with seeing that commercial buildings are compliant with the regulations in place as regards air quality, the physical dimension of IAQ is not only limited to the "indoors". It also takes into consideration the air quality within the immediate surroundings of the commercial structure. These two (indoor air and surrounding air) are inseparable, as indoor air ultimately comes from a commercial building's surroundings. Focusing strictly on indoor air quality will ultimately be futile, thanks to continuous air exchange between both environments.

Acceptable IAQ refers to air in which there are no known contaminants at harmful concentrations as determined by public health authorities, and with which a substantial majority of the people exposed do not express dissatisfaction. However, there are some basic physical standards that good IAQ is generally expected to meet.

Odorless: For the IAQ of a commercial building to be considered as healthy, it must be breathed without the perception of any odors, especially pungent ones. This is a simple test, and one of the tell tale signs of whether the air within a given area is of good or poor quality. The moment air begins containing odors, it implies that it is already contaminated, and necessary steps have to be taken to ensure that the source is identified and the odor removed.

Colorless: Good indoor air should be clear and without any impurities. Colorful air usually contains particles such as dust and concentrations of carbon monoxide. Stuffy and colorful air could cause difficulties in breathings, leading to lung and liver infections. Fog however, is simply an accumulation of moisture in air, and shouldn't be necessarily considered as a sign of poor air quality. Some fogs do contain impurities, but this isn't true for all.

Examining the Causes of Poor IAQ

As earlier mentioned, IAQ is a function of the concentration of impurities in the air within a commercial building. Primary amongst these impurities are: Volatile Organic Compounds (VOCs), Carbon dioxide (CO2), Particulate Matters (PMs), and Formaldehyde (HCHO). Each of these variables will be looked at in detail as concerns their relationship with IAQ.

Volatile organic compounds (VOCs) are emitted as gases from certain solids or liquids. VOCs include a variety of chemicals, some of which may have short and long-term adverse health effects. Concentrations of many VOCs are consistently higher indoors (up to ten times higher) than outdoors. VOCs are emitted by a wide array of products numbering in the thousands. They are commonly found in everyday household products such as paints, chemicals, pesticides, and cleaning supplies. Floor coverings, furniture, air fresheners, and even dry-cleaned clothing can produce VOCs that contribute to poor indoor air quality.

As a general advice, it is always very important for commercial building managers to ensure that there is proper ventilation when using these products. After use, the area should also be void of occupants to avoid exposure. During the application of materials or chemicals with VOCs, the expert in charge should wear protective clothing to ensure that they too are not exposed.

Exposure to VOCs has several negative health effects, depending on the duration of exposure. Short-term exposure to volatile organic compounds can cause eye and respiratory tract irritation, headaches, dizziness, visual disorders, fatigue, loss of coordination, allergic skin reactions, nausea, and memory impairment. Long-term exposure to volatile organic compounds on the other hand can cause damage to the liver, kidneys, and central nervous system.

It is a naturally occurring gas from activity as common as breathing. Surface soils can sometimes contain high concentrations of this gas from decaying vegetation or chemical changes in the bedrock on which commercial buildings are built. Depending on the temperature and pressure, carbon dioxide can also exist as a liquid or a solid. In its solid form, carbon dioxide is called dry ice. Within commercial buildings, appliances such as refrigerators, coffee makers and even mobile phones can emit CO2. Combustion and activities involving fire in commercial kitchens can also lead to the emission of CO2. Combustion from vehicles around commercial building also leads to the release of CO2.

Carbon dioxide in its gas form is an asphyxiant, which cuts off oxygen supply for breathing, especially in confined spaces. Exposure to concentrations of 10 percent or more of carbon dioxide can cause death, unconsciousness, or convulsions. Exposure may also damage a developing fetus.

The best method through which dangerous levels of carbon dioxide can be avoided in commercial buildings is by ensuring proper ventilation. By keeping plants in rooms, the quantity of CO2 will be reduced as plants use CO2. Building occupants should also not cohabit with animals in confined spaces, as their metabolic actions also cause the release of CO2.

Particulate matter is a term generally used in referring to small solid or liquid particles suspending in air, and are measured in micrometers. They are sometimes so small that they cannot be seen by the naked eye. To observe particulate matter, let light stream in through one source in to a dusty room. The dust suspense in the room will be clearly highlighted by the light beams entering the room. Particulate matters that pose the most risk to commercial building occupants are PM2.5 and PM10 (2.5 to 10 micrometers in diameters). Particulate matter can occur due to dust accumulation and mundane activities such as dusting, which leads to the re-suspension of already settled matter.

Exposure to inhalable particles can affect both your lungs and your heart. Many studies directly link the size of particles to their potential for causing health problems. Small particles (less than 10 micrometers in diameter) can get deep into your lungs, and some may even get into your bloodstream. People with heart or lung diseases such as coronary artery disease, congestive heart failure, and asthma or chronic obstructive pulmonary disease (COPD), children and older adults may be at greater risk from PM exposure. Scientific studies have linked PM exposure to a variety of health impacts, including: Eye, nose and throat irritation, aggravation of coronary and respiratory disease symptoms, and premature death in people with heart or lung disease.

To avoid the accumulation and exposure to PM, dusty surfaces should be cleaned with damn clothes. During cleaning, be sure to protect yourself with dust masks to avoid inhalation which could lead to fatal health consequences.

Formaldehyde is a colorless, strong-smelling gas used in making building materials and many household products. It is used in pressed-wood products, such as particleboard, plywood, and fiberboard; glues and adhesives; permanent press fabrics; paper product coatings; and certain insulation materials. It is also used to make other chemicals. When dissolved in water, it forms formalin, which is used in the preservation of corpses and also of medications.

Chronic exposure to formaldehyde may also cause general damage to the central nervous system, such as increased prevalence of headache, depression, mood changes, insomnia, irritability, attention deficit, and impairment of dexterity, memory, and equilibrium.

In conclusion, the best way through which commercial buildings can protect their occupants from dangerous doses of air is by leveraging technology. By purchasing and installing smart sensors fine tuned to occupant needs, commercial building management will always be alerted to the prevalence of these gases before they turn lethal.