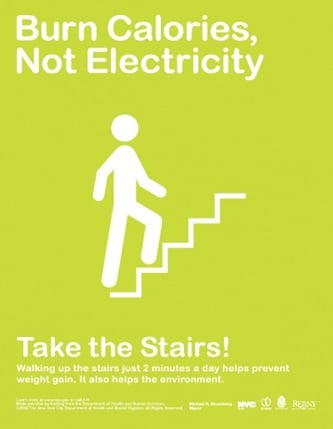 In addition to being a technology writer, I happen to be a fitness instructor, certified by the American Council on Exercise since 2000. I keep up with the latest fitness research out of necessity to maintain my certification, but also because it interests me. The fact that a sedentary lifestyle, like smoking, is profoundly damaging to our health is becoming well known. But can smart buildings help?

Apparently some think so.

Additionally, the architects excluded vending machines and coffee bars “in favor of kitchens to promote cooking and healthy eating.”

Have Kitchen, Will Cook?

The above description immediately reminded me of the new Intel Israel campus, which some thought would “nag” inhabitants towards health. Describing the new GW University building, author Lucy Wang wrote, “The architects engineered public health into the building,” further strengthening the association.

Providing opportunities for exercise for those who are interested is a great thing. But I confess to being perplexed at the belief that availability of kitchens will preclude inhabitants eating take out. I have a wonderfully equipped kitchen here in my home and I certainly don’t use it to exclusively cook all of my meals.

The Gates Foundation has given the University of Washington $210M, its largest donation ever to build a home for a new initiative to improve global health. “The new building will house many of the players in the UW’s Population Health Initiative.”

UW President Ana Mari Cauce said, “Big data allows us to diagnose the health of communities, not just individuals.” This, “incredibly audacious initiative” will include a wide variety of university departments, with innovative strategies such as studying businesses’ success distributing refrigerated beverages, as a potential model for vaccine distribution. The new building will be between 265,000 and 290,000 square feet, and is expected to facilitate the cooperation of the various departments.

Stairwells: From Seclusion to Prominence

“’Health is also influenced by urban planning and architecture,” said Thaisa Way, a professor of landscape architecture, executive director of Urban@UW and a member of the initiative’s executive council. ‘For example, most multistory buildings put elevators in a prominent place and hide the stairs.’”

I could not agree more. Many times I’ve sought a staircase, only to never find it. Or worse, I find it and it doesn’t lead to the lobby. I exit the enclosed, often dirty, smelly, stairwell only to exit the building entirely on another side and end up lost!

So, does it Work?

“The data has been pretty thin about how green buildings improve health, personal performance and productivity - that is until now. This is important because while inspiration will spark the green building movement, it’s the data that will sustain it.” John Mandyck is a journalist after my own heart.

He lists a Harvard study in which employees in green-certified buildings showed 26% higher cognitive function scores. While promising, endless skeptic that I am, I had to see if rigorous studies had been conducted on the fitness impacts of buildings. I found the below studies, which are encouraging.