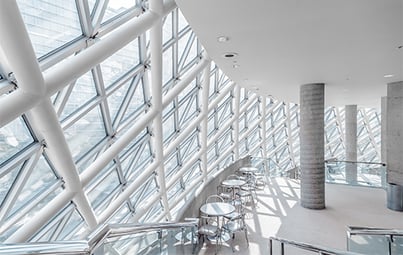 The Evolution of Smart Buildings

When someone says “smart building,” what image pops into your mind? You might immediately think of a sleek, monochrome structure, equipped with futuristic technological bells and whistles. In actuality, the future has been here, and for quite some time. Smart buildings are nothing new--the use of technology in building systems in order to make user lives easier has been around since at least the 17th century, strange as that might seem. The growth of the technology itself has skyrocketed since the turn of the 21st century. From HVACs to cyber security, the market for smart buildings only continues to grow and refine itself, promising continued developments in 2017. The evolution of smart buildings can tell us a lot about the trajectory that we’re on, and the advances that will be made in the near future.

Though modern-day HVACs typically include high-tech mechanical engineering, one of the earliest models involved just a simple thermometer. In the early 17th century, Cornelius Drebbel invented a thermostat that enabled a self-regulating environment. Drebbel’s invention was the forerunner of modern-day air circulatory systems, which rely on a feedback-controlled machine to regulate a building’s environment. Tweaks were made to his invention throughout the 18th and 19th centuries, but it wasn’t until the 20th century--and the invention of computers--that the smart building evolution really exploded.

The invention and subsequent ubiquitousness of digital computers in the 20th century prompted a wide-scale integration of technologies (compressed air, elevators, heating units) into buildings. And at its core, this is what makes a building smart. According to Tina Casey of Triple Pundit, apart from all of the space-age features, a smart building is really just a building “that achieves significant energy savings by taking advantage of improved technology and materials in terms of structure, appliances, electrical systems, plumbing, and HVAC.”

So it is important to remember that a key feature of a smart building is its ability to evolve intelligently. This doesn’t necessarily mean complete overhauls every time technology or function becomes obsolete. Rather, it means that building managers and owners should work together with user input to integrate upgrades and retrofits where they make the most sense. This way, user needs are fully met, and owners don’t break the bank while doing so.

Some of the most exciting innovations right now in smart building technology have to do with the way IoT, data mining, and data-driven management are being integrated into existing systems. All of these are things that can be cost-effectively retrofitted to older buildings, allowing owners to create a welcoming and safe environment that meets user needs.

IoT connects devices and systems to the Internet throughout buildings, creating a living information system out of a previously inert collection of objects. Smart building technology can centralize this into a Building Automation System (BAS), which is a centralized system responsible for monitoring and controlling a building’s facility systems. From mechanical systems, to electricity, to lighting, plumbing, HVAC, and water, a BAS connects and monitors systems in order to optimize overall performance. It’s operates a little like the central nervous system of the human body.

But there’s only so much a BAS can do with the information that it collects. Often there is a bottleneck of data, preventing efficient analysis and action. And this is where data mining comes in. A smart building is only considered smart insofar as it helps cut energy costs, streamline operations, and operate in an environmentally-friendly way. Data mining is an invaluable tool that can be used to process the sheer volume of information collected from day-to-day operations, targeting what is relevant, and what isn’t. That information can then be conveyed to the building manager. In order for a building to function optimally, a building manager doesn’t necessarily need to know about every single minute temperature adjustment. However, it is important that the manager receives information about larger trends that will allow retrofits to be made in order to more effectively systematize operations.

A Visual Data Overlay (VDO) is an OT interface that does just that. A VDO collects information from a BAS, processes it, and presents it to managers in an easily-accessible format. It is the next logical step in smart buildings: it optimizes information in order to enable intelligently management. The best part about VDOs? They are relatively inexpensive, making them a logical and preferred retrofit to current systems. Rather than going through a costly upgrade (which also runs the risk of creating functional obsolescence for its users!) a VDO retrofit works with the present BAS technology to retrieve and simplify data, and then execute necessary commands and adjustments.

This evolution may sound abstract, but in practice, it’s quite simple. Some examples include water management and space optimization:

The buzzword of the future: intersectionality

Currently, many commercial smart buildings only regulate critical systems--climate, energy, security--but the future of the technology will undoubtedly see a much more holistic approach. As smart buildings continue to evolve toward deeper and more intelligent collaboration between BASs and VDOs, they will also evolve toward greater collaboration with their human occupants; a truly living system that is greater than the sum of its parts.

In their report on the evolution of the smart office, Schneider Electric describes a future of buildings that intersect sustainability, productivity, and worker comfort. These buildings will be ultra-sensitive to all, user needs, not just the physical ones (temperature control, security, etc). A building must, of course, be functional, first and foremost. That means that technology must keep up with the demands of its users, and that the users feel comfortable inside the building. The current smart building technologies of climate control, light levels, sound levels, and energy reduction address these demands.

Many buildings are going the extra mile to address the next stage of evolution, which includes employee well-being, collaboration, productivity, and communication. The above-mentioned CO2 sensors are one such example; too much CO2 in the workplace can be disruptive, causing negative feelings and distractedness. Technologies that group people traveling to nearby floors, saving on elevator stops and trips, are already in place at Seven World Trade Center in New York. Other buildings have capabilities to isolate and suppress fires. The evolution of these technologies promises to streamline and improve user lives wherever possible.

This continued evolution of smart buildings is exciting for building owners, because it means countless opportunities for meeting future needs of building users. However, it does mean that owners are often faced with tricky decisions about upgrades and retrofits in the present. The best approach is to look at the smart buildings themselves for inspiration, and analyze the available information. It makes sense for owners to utilize the help of sites specifically created for this task, in order to figure out which decision is best for them. Barack Obama’s Better Buildings Initiative is one such site, allowing businesses to access technologies and strategies that might be useful for making such decisions.

In the future, it is possible that all smart buildings will have capabilities to generate their own environmentally-friendly energies according to their needs, or the ability to grow and process crops for urban residents. We’re already seeing widespread use of green technology such as green and cool roofs, net-zero buildings, and increased demand for LEED certification. As many countries shift toward sustainable energy, the building industry will follow suit. These industries will only grow in the coming years. As the world focuses its attentions on sustainability, as well as community-building, it makes sense that the buildings we desire reflect these values. It might not be so outrageous to imagine agile buildings that adapt to the needs of their users in those ways. These buildings might indeed seem “space-age”, but with the current expansion of the smart buildings industry, as well as the development of its technologies, the space age doesn’t seem so far away.