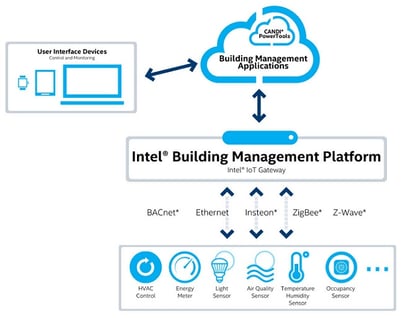 Everyone seems to be ‘playing nicely’ in the smart building world these days. Earlier this week I wrote about integrations between Schneider Electric and Panasonic, and PointGrab and Gooee. PointGrab also recently announced a $7 million investment.

This week, CANDI’s PowerTools software has been integrated with the Intel Building Management Platform (Intel BMP).

CANDI CEO Steve Raschke said, “CANDI PowerTools software provides the bridge between the Intel® BMP and the end applications that make buildings smart and connected. We make it easy to access and use more data from more devices, with a cost-effective, cloud-based solution.”

CANDI’s press release states that smaller commercial buildings have found it difficult to justify the costs of building management systems (BMS). Memoori confirms, “Mid-market buildings make up some 85% of the commercial real estate in the US, that’s over 5 million buildings of which less than 10% have smart building systems.”

The Smart Buildability Index was launched this week in Dubai. The index aims to standardize building designs that adopt modern building techniques such as 3D printing and use locally manufactured steel structures, and pre-fabricated pillars and walls, in addition to rationalizing the use of unskilled labor.

“Such indexes should be developed to ensure standards in the UAE are on par with the highest international benchmarks,” stated HH Sheikh Mohammed bin Rashid Al Maktoum, Vice President and Prime Minster of the UAE and Ruler of Dubai.

In other worldwide smart building news, the 10th edition of the Shanghai Intelligent Building Technology (SIBT), was held this week. Next week Smart Home Summit, will take place from November 1-2 in Palo Alto, CA.