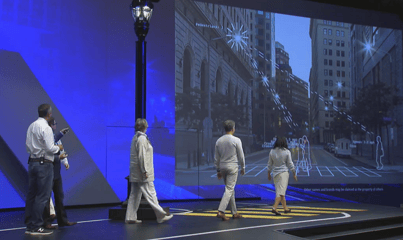 Last week Intel held their annual Developer Conference. Over 6,000 people attended IDF ’16, a record number, and a 20% increase in developer attendance over the last 3 years. In the opening keynote presentation, Intel CEO Brian Krzanich covered four themes related to how Intel is:

The event kicked off with what Intel calls “Merged Reality,” described by Mr. Krzanich as, “where things from the real world can come into the virtual world and vice versa. At Intel we think this is going to be big… Virtual Reality (VR) has truly gone mainstream.”

Perhaps it is ‘mainstream’ in the fact that everyone knows what it is, but I don’t think consumer ownership rates would back up this statement.

Intel introduced Project Alloy, which takes the cord off the VR headset and eliminates the need for an elaborate set up in a dedicated space. As a self-contained virtual world, Project Alloy provides several new experiences: mobility in six degrees, no need for external sensors, ability to use your hands as controllers, and opportunity to merge the physical and virtual worlds together. With Project Alloy, users are untethered and can walk freely in their houses.

In the second half of 2017, Intel will open source the Alloy hardware, and will also open up the Real Sense APIs.

Incorporating sight into computing gives devices the able to understand and respond to their environment. This capability, which is critical in robotics, allows drones to avoid obstacles. Intel also discussed Project Arrow, an all in one board that gives developers the ability to build their own drone and launch applications into the sky.

Of course visual intelligence is essential to autonomous cars as well, which is an ecosystem Intel intends to be in the middle of.

The Rise of the IoT: The Cloud

The rise of the IoT, to Intel, represents a transformation for the cloud itself. Mr. Krzanich mentioned the massive quantities of data that will continue to be produced by IoT technology such as autonomous vehicles, airplanes, and smart factories.

“Developers have an unprecedented opportunity to build on, analyze, and interpret that data. Our goal is to equip you with the tools to analyzed data locally, in the fog between, or in the cloud itself.”

Mr. Krzanich stated, “We believe this can cut development time from weeks to literally minutes.” He gave the example of putting sensors on someone’s leg to pattern match a karate kick. I can’t imagine I’m the only geek who immediately pictured Neo learning Kung Fu via The Matrix.

Another presenter was Jeff Immelt, Chairman & CEO, GE, who stated “At GE we say every industrial company has to transform to be a digital company.”

Mr. Immelt discussed Predix, an industrial, cloud-based analytics model that will be available through Intel. “In the industrial world, very small changes in productivity drive very big outcomes for customers.” Both GE and Intel have leveraged Predix in manufacturing to drive efficiency, reduce emissions, and increase effectiveness.

Predix is a way for developers to get the speed, scalability, and security needed to take IoT data and gain insight in order to build solutions to make cities more livable and safer.

Smart cities implementations were also demoed, which included passing data on things such as pedestrians and parking spaces to Predix in real time. The data was all metadata, with no personally-identifiable data. The use cases reminded me of smart offices, just on a larger scale. Sure enough, both GE and Intel are rolling out these types of technologies indoors at their headquarters.

While it wasn’t covered in the opening keynote, one other fascinating demonstration at IDF was a Quark-based "mote" prototype chip. Designed for internet of things applications such as "smart tags" for packages, the chip can report on shipping conditions in real time and sense things like rough handling.