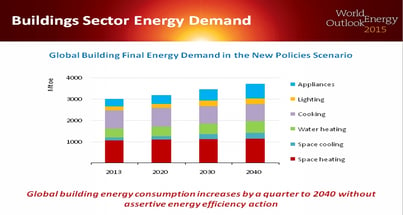 Sustainable Energy Week (EUSEW), an initiative of the European Commission, is a month-long series of activities to build a secure energy future for Europe. EUSEW includes efforts towards the “Energy Union,” a plan to make energy more secure, affordable, and sustainable.

Buildings are responsible for 40% of energy consumption and 36% of CO2 emissions in the EU, making building efficiency a key issue during EUSEW. According to the Renovate Europe campaign, buildings' energy demands can be cut by 80% with modern technology. Unfortunately, the current regulatory and legislative framework for EU member states to report the state of their building stock simply isn’t robust enough to deliver results.

Among sessions recently held in Brussels as part of Sustainable Energy Week was a workshop, “How to Boost Energy Efficiency in Today’s Buildings– International Perspectives.” The Energy Performance of Building Directive (EPBD) is currently under review and a proposal for a new Directive is expected in 2016. The workshop looked at how other parts of the world are dealing with energy efficiency in existing buildings. A video recording is available online and selected accompanying visuals are included below.

Stéphanie Bouckaert, Energy modeler, International Energy Agency stated that, worldwide, two-thirds of the economic potential to improve energy efficiency remains untapped. Fortunately, mandatory energy efficiency regulations are on the rise, so these numbers are expected to improve. Space heating is currently a major consumption of energy in the building sector, but space cooling will play an important role by 2040. Energy demand of buildings should grow by 25% by 2040, mostly due to space cooling, but appliances as well.

More than half of the savings are projected to come from heating and cooling through more efficient systems and better building envelopes. Additional savings can come from improvements in appliances and lighting, such as increased use of LEDs.

An additional presenter from Japan was Ikuo Hamanaka, Deputy Director, Energy Efficiency and Conservation Division, Energy Conservation and Renewable Energy Department, Agency for Natural Resources and Energy, Ministry of Economy, Trade and Industry. Mr. Hamanaka noted that it is relatively easier for larger buildings to invest in higher performing equipment because it is already a big investment and owners tend to prefer higher standards. Additionally, Energy Management Businesses, such as ESCOs, Energy Service Companies, are becoming more common in Japan. Building owners are encouraged to use these services, and Mr. Hamanaka and his colleagues are currently preparing to analyze the data.

As a technologically advanced society, Japan is also looking at the energy efficiency of electric toilet seats. Indeed, they’re a step ahead of both the EU and the US, as Mr. Van Steen pointed out.

Presenting on American initiatives, Brendan Owens, Chief of Engineering, US Green Building Council, discussed three distinct buckets: regulatory, government led, and private sector led initiatives. Although the stringency of energy codes has been declining in recent history, as shown on the graph. Mandatory energy use disclosure at a city level has led to some success. Apparently sheer embarrassment is spurring action and leading to voluntary efforts by building owners. Finally, Mr. Owens discussed the success of the ENERGY STAR Labeling program.

Jens Laustsen, Coordinator of the Concerted Action on the Energy Performance in Buildings Directive (EPBD), noted that many buildings have become prettier as they have become more energy efficient. The multiple benefits of increased energy efficiency include job creation.

The EPBD focuses on energy consumption of buildings in EU member states plus Norway, 29 total members, and through the below busy slide, Mr. Laustsen showed how certifications vary widely among member states. Further, deep renovations may be only as much as 3% per year, which presents a massive challenge.

The challenges are great, from lack of mandatory efficiency codes in some countries and lack of renovations, to legislation 'without teeth.' However, we at Senseware find the focus and ongoing efforts put into increasing building efficiency encouraging.