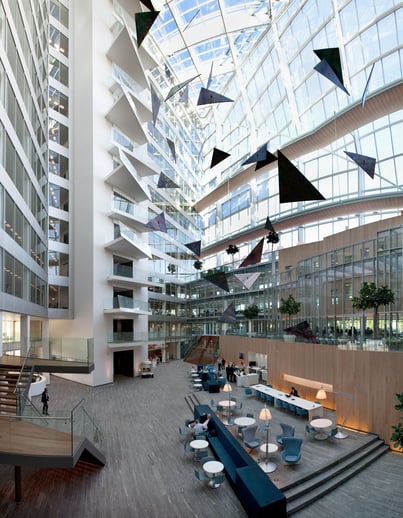 Talk about cool – the building deemed to be the smartest and most connected in the world goes well beyond measuring energy and water consumption. Temperature and humidity measurements allow for precision controls that eliminate hot and cold spots. Smart lighting fixture that are connected to the Internet provide only as much light as needed. These features, and more, are part of a commercial property called the Edge. Its approach to building management and conservation shows just how farcommercial real estate's use of smart building technology has come to shape the future of commercial construction. The future of smart buildings, it seems, is already here.

The Edge was built in Amsterdam, the Netherlands, where the Dutch speak of the building by saying “het nieuwe werken,” which roughly translates to “the new way of working,” according to Bloomberg BusinessWeek. Workers are connected to the building through an app on their smartphones, which becomes the worker’s passport to all of the Edge’s features. By analyzing how many workers are scheduled to work and at what times, the Edge app can allocate workspaces, calibrate climate controls, and even determine when to clean the bathrooms.

All of that measurement is conducted by sensors. The Edge boasts some 40,000 sensors throughout the facility. Motion sensors calculate the numbers of people using high-traffic areas, and alert the building’s custodial staff when these areas need cleaning. The Edge also employs connected LED lighting fixtures, which are able to transmit data. Paired with sensors, these fixtures can monitor aspects such as movement, light, and temperature throughout the building, which helps with building management, Gizmag explains.

These smart lighting fixtures, which are reportedly as much as 80 percent more efficient, draw their power from a Power over Ethernet technology, a system that is also able to transmit data. This capability means that the system is able to offer greater control and monitoring capabilities compared to conventional lighting systems, according to Gizmag. Analytics software crunches data from the sensors keeping tabs on all of the Edge’s operations, making smart decisions on everything from which parts of the building to open or close, to when coffee machines need to be refilled.

“Facility managers can then look at building utilization and energy usage in historical and real-time views,” Gizmag says. “Rooms or floors could be left closed or uncleaned if they are shown to not be used on certain days and carbon dioxide levels can be used to indicate room occupancy at any given time.”

Smart technology is key to operating the Edge both inside and out. Solar panels are interspersed with windows across the exterior of the building’s South-facing exterior wall, Bloomberg BusinessWeek explains. While the South-facing windows are recessed to provide shade and minimize heat gain, the North-facing façade of the building is almost entirely glass in order to maximize light. Water conservation is also a part of the Edge’s operation. Rainwater collected in a large concrete basin in the back of the parking garage is used for toilet flushing and for watering the outdoor landscaping. BREEAM, the British ratings agency that is comparable to LEED certifications available for U.S. buildings, gave the Edge its highest ever sustainability score, deeming the site the most sustainable building in the world.